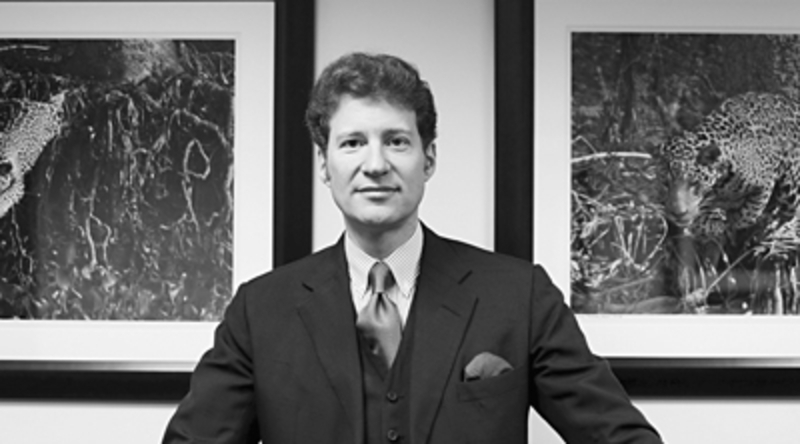 Issue dated 04/03/2019 Reading time 16 minutes
By turns a mining entrepreneur, art collector, and protector of endangered animal species, the Swiss-American billionaire Thomas Kaplan is becoming an ever-closer associate of Abu Dhabi Crown Prince Mohamed bin Zayed al-Nahyan (MbZ). In early 2019, Kaplan has been showing his collection of Dutch art at the Louvre Abu Dhabi museum, only two years after Mohammed bin Zayed personally appointed him to head the International Alliance for the Protection of Heritage in Conflict Areas (ALIPH). This organisation, dedicated to protecting artefacts at risk of destruction by Islamic State (ISIS) and its allies, currently active in the Iraqi city of Mosul, was set up by the Emirati strongman and by former French president François Hollande.

In the shadow of this alliance with Mohammed bin Zayed lurk much more strategic issues. Over the years, Kaplan has built up a mining empire through his investment firm Electrum Group - named after the alloy of gold and silver from which the first ever coins were struck - in which the UAE sovereign wealth fund Mubadala has invested. At the same time, the billionaire has set up extremely well-connected philanthropic and lobby groups which mostly operate in the Middle East. Kaplan thus boasts a significant arsenal of influence, focussed on Iran and its neighbours, and, to a lesser degree, China. This has not escaped the interest of western spy chiefs.

To achieve this, Kaplan, whose father Jay Kaplan was an entrepreneur based in New York, then Florida, relies on an influential entourage cultivated since his earliest years as a pupil at the prestigious – and expensive – Swiss boarding school, Le Rosey. Kaplan counts among these close friends several powerful clans, including his wife's Israeli family, the Recanatis, the Saudi Khashoggis and the German industrialist Thyssens.

Top French cultural and educational executives were among the guests at a Versailles state dinner given by the French president for Emirati leaders in a charm offensive that aimed to breathe new life into projects such as the Louvre Museum's and Sorbonne University's offshoots in the Emirates. [...]

The Yazidis, represented by Nallein Sowilo, have struggled to get their voice heard in Washington but are now making renewed efforts, and in particular to press their claims against the Barzani clan. They are up against the powerful Kurdish family's well-established networks in the United States. [...]

Christian charities at heart of France's careful policymaking on Syria

Paris is struggling to reconcile its intent to maintain a presence in Syria while refusing to engage in any contact with the Assad regime. With a mixed bag of heritage restoration, humanitarian work and support for Christians living in the Middle East, France is for now using its partnership with the UAE through the ALIPH foundation to discreetly fund world heritage sites, starting with the Krac des Chevaliers castle. [...]

Macron dishes out Legions of Honour in the Gulf

Just weeks after the French president completed his trip to the United Arab Emirates, Qatar and Saudi Arabia, several members of the French business community in the region have been decorated with France's highest order of merit. [...]

The spat between Abu Dhabi and Riyadh is affecting major arts and culture programmes in the Gulf, putting the French government, which is involved in both countries' efforts, in a tight spot. US businessman, philanthropist and art collector Thomas Kaplan is also caught in the middle. [...]

Recently called as an expert witness in a case into the death of US soldiers in Iraq, former spy Michael Pregent is often interviewed in the media, revealing an anti-Iranian stance that has helped him land consulting work. [...]

Determined to push for their cause with the new Biden administration, Syrian Kurds have been busy in Washington hiring seasoned lobbyists to help them cultivate connections within the Democrat leadership. [...]

According to our sources, US-Swiss businessman and philanthropist Thomas Kaplan attended a meeting at the Elysee Palace between President Emmanuel [...]

With talk increasingly tough between Washington and its Gulf allies, Tehran has trumped up a spying case against environmentalists who appear to be linked to an Emirati-backed NGO. [...]

IronX, a new cryptocurrency trading platform financed by a Saudi prince, has allies in the Conservative party that are helping it handle its thorny relationship with the government. [...]

Thomas Kaplan's anti-Iran lobbies on their way to Paris

The American pressure group Counter Extremism Project (CEP), popular with Republican spy masters, will hold its first meeting in the [...]

French philosopher Bernard-Henri Levy was among the foreign guests at [...]

CEP wants to bring "name and shame" method to Brussels

American pressure group Counter Extremism Project (CEP), which counts several Republican spymasters among its ranks, would like to see the [...]

Having only very recently retired from active service with the [...]

How the Recanati clan gained head start on cybersecurity market

The family of former Israeli banker Leon Recanati has positioned itself as one of the leading investors on the Israeli cyber market. [...]

Billionaire Thomas Kaplan, who is close to Tony Blair's former chief-of-staff Jonathan Powell, is getting into Pakistan's mining industry with the help of local generals and the Chinese. [...]

Jho Low, the Malaysian businessman at the centre of the [...]

The massive fraud scandal in Malaysia involving the part-publicly owned fund 1MDB looks set to impact upon a number of French personalities. [...]

Keith Craig is poised to step down as the chief executive of the upmarket London corporate intelligence firm Hakluyt. [...]

Like Carlyle in the 1990s, the private equity giant KKR has been recruiting former CIA officers. David Petraeus was recently put in charge of its research centre. [...]

Having lost his case the first time round in February [...]

Bernard Arnault's surprise acquisition of a chunk of French luxury goods house Hermes has prompted a pitched battle between the LVMH mogul and the families at Hermes' helm. [...]

British Conservative member of parliament Daniel Kawczynski is working to [...]