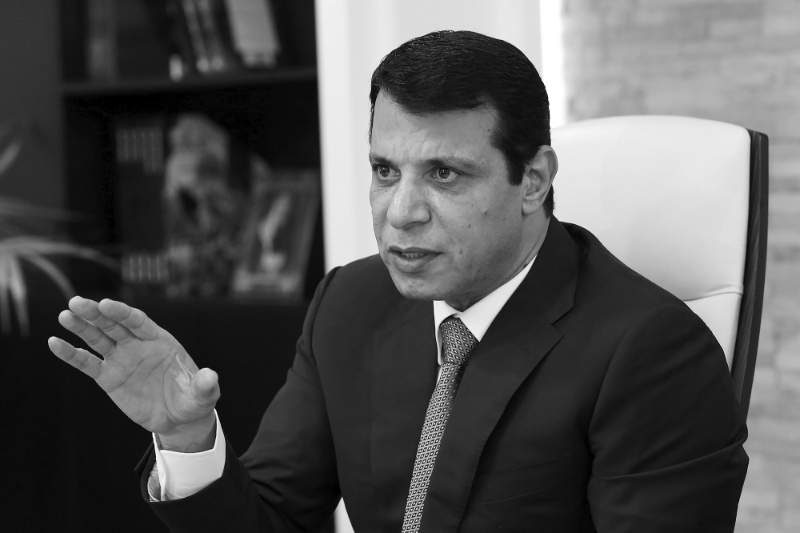 Issue dated 26/04/2021 Reading time 13 minutes
From his golden exile in Abu Dhabi, Mohammed Dahlan seems to be a constant presence in political and business affairs in the region, from the Balkans to Israel, Libya and Yemen, while staying discreetly in the shadows. Palestinian Authority leader Mahmoud Abbas's big rival would rather let his influential friends and political allies do his bidding for him. As the general and presidential elections loom, there is much excitement in Palestinian politics about the prospect of Dahlan's return. Intelligence Online shines a light on the former spymaster's eclectic network of relationships.

Although his regional activities keep him busy, Mohammed Dahlan has never lost touch with the political scene in Palestine, letting it be known that he could return at some point, and his supporters are excitedly hoping the country's elections later this year will be that moment. Since the start of the year, Dahlan has been giving his attentions to his native Gaza Strip, organising a series of image-boosting deliveries of Abu Dhabi-funded humanitarian aid (Intelligence Online, 18/01/21). To block Dahlan's political path, in February President Mahmoud Abbas banned him from running in any future election but that has not stopped Dahlan making his moves, both in Palestine and across the region.

Considered at times to be too close to Egypt, at others too close to Israel, Dahlan fell from favour in the West Bank in the early 2000s and was forced to resign as head of Preventive Security in 2007 after Hamas came to power in Gaza. He went into exile in 2011, initially moving to Cairo and subsequently settling in Abu Dhabi with his wife Jalila Dahlan and their four children. While keeping one eye on Palestinian politics, he threw himself into a new role as special adviser to Crown Prince Mohammed bin Zayed Al Nahyan, who was a fighter pilot in the UAE Air Force at the time. Dahlan went on to become the representative of the UAE's interests abroad, most notably in Serbia, where he helped UAE business, and in Yemen where he oversaw the recruitment of private military companies (Intelligence Online, 24/10/18). He remains at the forefront of UAE-Israeli relations in the wake of the two countries' diplomatic normalisation last year (Intelligence Online, 26/08/20).

Fatah keeps lead over Hamas in race for Damascus

In search of external sponsors, the two Palestinian factions intend to take advantage of Syria's return to grace and enlist its support. Both Hamas and Fatah are keen to ingratiate themselves with Damascus, but Mahmoud Abbas's party is currently leading the way. [...]

Turkey and the UAE are committed to normalising their relations and hope to see a fruitful economic relationship emerge based on defence investments. All this depends, however, on the two countries being able to take the sting out of certain sticking points, not least the matter of Mohamed Dahlan, protected by Abu Dhabi and targeted by Ankara. [...]

Majed Faraj, head of the Palestinian Authority's Preventive Security Service, visited Dubai to inaugurate the Palestinian pavilion at the Universal Exhibition. He also went to seek support from the United Arab Emirates for his candidature to succeed Mahmoud Abbas despite persistent competition from his rival, Mohammed Dahlan. [...]

On a diplomatically important visit to Washington, Egyptian spymaster Abbas Kamel obtained pledges of closer intelligence cooperation, marking a step towards renewed dialogue with the US. [...]

Determined to play a central role in Palestinian politics in this period of crisis, Mohammed Dahlan has been mobilising allies in his Democratic Reform Bloc as well as his contacts in Egyptian intelligence, which has been involved in the talks that led to the cease-fire. [...]

While it is steering clear of most regional issues at the moment, the UAE has not eased off on its Turkish nemesis, a position helped by the arrival of Turkish defector Sedat Peker and his high-value business networks. [...]

As the leading regional powers meet in Doha to try to organise a ceasefire, the new cycle of violence between Israel and the Palestinian territories is following its own logic on the ground, taking it outside the ambit of the traditional negotiations between the master spies. [...]

From Abu Dhabi, where he lives in exile, Gaza's Mohammed Dahlan coordinated the delivery of a humanitarian convoy to the Palestinian enclave, providing an opportunity to garner support from beyond his circle of allies. [...]

A delegation from Egypt's general intelligence service, the Mukhabarat El [...]

Mahmoud Abbas ordered military intelligence to conduct the purge against supporters of his rival Mohammed Dahlan, rather than Preventive Security, headed by his potential successor Majed Faraj. [...]

After the UAE, Muscat, Khartoum and Manama may be next to recognise Israel

In the wake of official relations being established between Israel and the UAE on August 13, both countries and the US are putting pressure on other neighbours in the region to follow suit. Oman, Sudan and Bahrain are the priority. [...]

Hamas political bureau chief Ismail Haniyeh has recently been trying to strengthen ties with Tehran in the context of Israel's [...]

The Shin Bet, Israel's internal security service, and its military intelligence counterpart, the Aman, have expressed grave reservations about Prime [...]

Ankara targets Dahlan to get to Abu Dhabi

In the cyber influence battle between Abu Dhabi and Doha, the two kingdoms are working with an array of foreign contractors. [...]

Several agents from the Bezbednosno Informativna Agencija (BIA), Serbia's intelligence service, have recently been seconded to the United Arab Emirates' [...]

The reconciliation between Mohammed Dahlan, Fatah’s former head of preventive [...]

Mahmoud Dahlan fought Hamas when he was Arafat's aide but he is now making overtures to the organisation via Egypt and Abu Dhabi. [...]

Dahlan back in business

Blacklisted by the movement, Mohammed Dahlan, Fatah's former strongman in [...]

With three-sided negotiations between the Israelis, Palestinians and Americans in full swing, Yasser Arafat's Fatah organization seems on the verge [...]

In recent weeks, col. Mohammed Dahlan, head of the preventive security agency in Gaza, has emerged among influential Palestinian circles [...]

When Yasser Arafat arrived at Cairo airport on Nov. 26 from a trip to India the president of the Palestinian [...]

Col Mohammed Dahlan, head of the Preventive Security service in Gaza, has become the number one bugbear of Palestinian fundamentalist [...]