Badr Jafar - the businessman 2.0 taking hold in the UAE 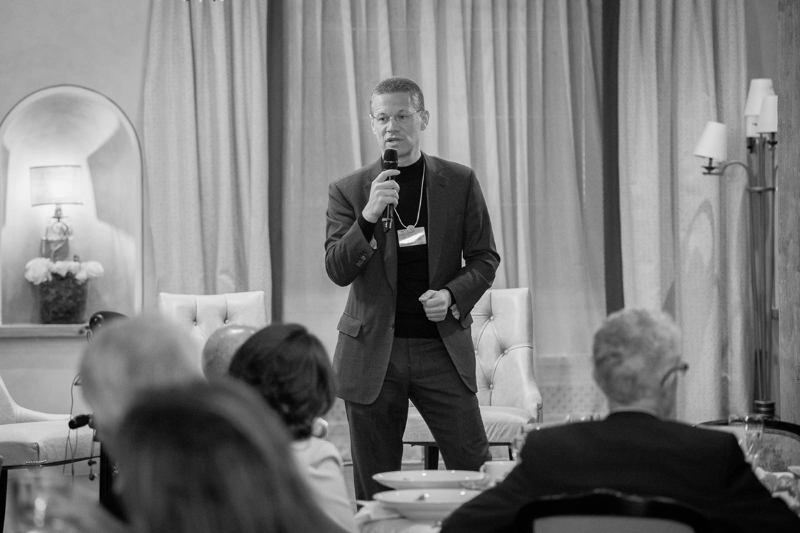 Issue dated 30/08/2021 Reading time 14 minutes
As at home in his brogues on a red carpet in New York's Upper East Side as in steel caps on an oil rig in Iraqi Kurdistan, the Emirati businessman Badr Jafar loves nothing more than singing the praises of his philanthropic endeavours and promoting the Middle-East youth. But behind the camera lights he has built a vast empire in the much more traditional – and profitable – sectors of oil and port terminals.
At 42 years of age Badr Jafar, a native of the Emirate of Sharjah, a Cambridge alumnus of 1999, and a 2011 World Economic Forum "Young Global Leader", a title backed by the UN where he frequently intervenes, is already a familiar face among the global elite. He sits at the head of Crescent Petroleum and Gulftainer, two groups active in the oil and gas sector and container terminals. Enjoying the support of the Emir of Sharjah, Mohamed Al Qasimi, and Khaldoon Al Mubarak, his half-brother and right-hand-man to UAE leader Mohamed bin Zayed Al Nahyan, Jafar is skilled at knowing the right people in the right places.

The empire he now helps grow was built by his father, Hamid Jafar, a member of a prominent Shiite Baghdad family that long prospered under Saddam Hussein's regime. Jafar, father, launched the family success story in the 1970s, first with Crescent Petroleum then Gulftainer. Under these close ties with the Iraqi authorities - forged by the family patriarch, then nourished by Dhia Jafar and his brother Jafar Dhia Jafar, father of Iraq's nuclear programme -, business boomed. Working with his brother Majid Jafar and sister Razan Jafar, Badr Jafar has kept the ball rolling.

But the young entrepreneur's sights were set well beyond the family business. With the support of a trusted set of business allies such as Peter Richards and Ravi Kumar, Badr Jafar has found his own place within the global landscape, aspiring to "diplomatic entrepreneurship" through the construction of a new business environment in the Gulf. The Pearl Initiative foundation, created in 2010 and of which the vice chairman of Bahrain's Shura Council Jamal Fakhro is a managing partner, answers to this call to develop the private sector by bringing together prominent figures of the business and political spheres, and state and international institutions. Jafar is also close to the political world of his home emirate, Sharjah, and enjoys the support of Emir Sultan Muhammad Al Qasimi as well as chairman of the chamber of commerce Adbullah Sultan Al Owais.

Outside his homeland, Jafar advocates for various institutions. He chairs Endeavor UAE in New York, and is a board member of Gaza Sky Geeks, a project aimed at promoting a digital economy in Palestine. His largesse has extended to numerous philanthropic activities: in 2020 he founded the Centre for Strategic Philanthropy based at Cambridge Judge Business School, where he is a member of the advisory board. Jafar's contacts are many and varied. He is known to have formed friendships with Bill Gates and the now disgraced Hollywood star Kevin Spacey, and has investing in various film and theatre productions. In 2015, he co-financed the Palestinian drama film The Idol and founded the Middle-East Theatre Academy. There have even been whispers of relationships with Hollywood celebrities, such as Naomi Campbell in 2006 and Czech model Petra Nemcova in 2008.

Chinese companies have quietly moved into the Lebanese port of Tripoli, which is shaping up to become a strategic point on China's Belt and Road Initiative. Its proximity to Syria is a big attraction. [...]

The development of the Iraqi Kurdistan's Khor Mor field, a major project of the region's Jafar dynasty, has recently obtained part of its finance from the US backed Development Finance Corporation (DFC) thanks to behind the scenes negotiations in Erbil and Washington. [...]

Barzanis caught up in anti-PKK fight

Ready to oppose PKK fighters in order to win the graces of Ankara or Baghdad, the Barzani family is now mired in a struggle that has spiralled beyond its original intentions, spreading even into Syria. [...]

The victor under Donald Trump on the Pentagon's massive JEDI [...]

With the restoration of Beirut port held up by the political crisis in Lebanon, the French shipping company CMA CGM is pressing on with its activities in the northern Lebanese port of Tripoli, a gateway to future business in Syria, while keeping one eye on the situation in the capital. [...]